CCTV news: the General Administration of Customs released on the 13th that China's foreign trade stabilized and improved quarter by quarter in the first three quarters of this year, and the total import and export value achieved positive growth within the year for the first time 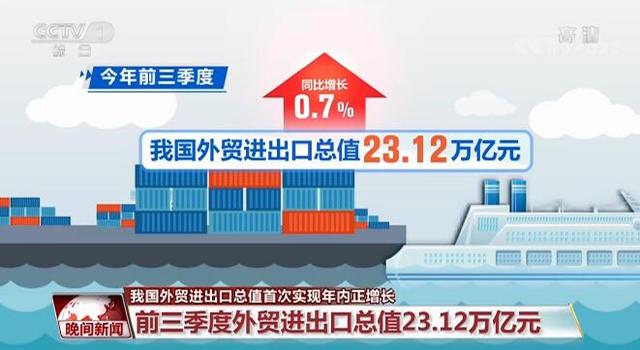 in the first three quarters of this year, the total import and export value of China's foreign trade was 23.12 trillion yuan

the import and export growth is obvious, and the leading role of private enterprises is prominent

according to customs statistics, since April, China's exports have achieved positive growth for six consecutive months, and the orderly resumption of domestic work and production has led to the continuous increase of export orders. At the same time, the sustained and stable recovery of China's economy has also supported the recovery of import value. In the first three quarters, the import and export of private enterprises reached 10.66 trillion yuan, a year-on-year increase of 10.2%, accounting for 46.1% of China's total foreign trade. The export of snail powder in Guangxi reached 26.3 times that of last year. China's fast food"Residential economy" commodities such as and freezers boosted China's export growth by 1.1 percentage points. Private enterprises play a more prominent role as the "stabilizer" of foreign trade