Shopify or Amazon? How does a person do Shopify?

Shopify is a one-stop SaaS mode e-commerce service platform, which is suitable for cross-border e-commerce to establish independent stations and brand official websites. More than 1000000 merchants in 175 countries around the world chose Shopify

Shopify is the most powerful and popular website building platform in foreign countries. Some people say that now the platform competition is getting bigger and bigger, and they can't make money anymore; Some people also say that being an independent station is a long-term plan. Today, let's discuss the issue of whether to be a platform or an independent station in the longer term 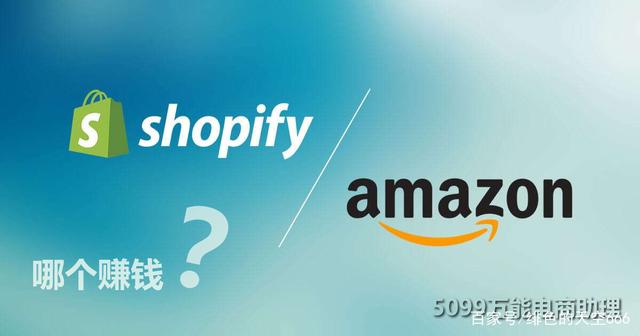 Amazon (Amazon) Founded in 1995, it is one of the earliest companies to start e-commerce on the Internet and the ancestor of the world's e-commerce industry. At present, Amazon has become the online retailer with the largest variety of goods in the world and the second largest Internet enterprise in the world. It has high foreign popularity and reputation and large buyer traffic

there is no doubt about Amazon's popularity. As of March 2019, 145.2 million mobile users have accessed Amazon's apps (statista, 2019), and Wal Mart, the second largest shopping app, has only 76.45 million mobile app users per month. The number of sellers on Amazon is about 3 million, and buyers and consumers have 400 million active users worldwide, covering 65 countries

there are a large number of products on Amazon platform. Specifically, as of April 2019, Amazon has 119928851 products (scrapehero, 2019). Amazon's largest category is books, with 44.2 million products, followed by electronics (10.1 million), and home and kitchen (6.6 million) ranked third

Amazon provides great opportunities for sellers all over the world. In the United States alone, Amazon has more than 150 million tourists every month! Amazon's global store opening operation is relatively simple and easy to get started, such as uploading products; Its own large traffic and platform specific traffic levers, such as Amazon's best seller and its own traffic; The attribute of shopping search engine, the buyer's purchase intention is relatively strong and the conversion rate is high

of course, e-commerce platforms like Amazon also have some disadvantages: low threshold, large number of people entering the site, serious price war and homogenization, and less and less traffic dividends; The restriction of platform rules is serious, there are many uncontrollable factors, and the change of multi platform policies and rules has great interference; It is not easy to precipitate and accumulate their own customers

Shopify is a popular self built foreign trade station in the United States, but most of them use Dropshipping, that is, the form of consignment. Compared with opening stores on e-commerce platforms such as Amazon, wish, eBay and express, the advantages of independent stations are also obvious, because they can save platform rent, FBA storage platform advertising and other service costs, and will not be negatively affected by platform policies

for example, building a station with Shopify is more like renting a store to do business. You have your own space. Once customers know your brand, they will start looking for your store. Selling through Amazon and other platforms is like shopping in supermarkets. Customers do not come specifically for you, but happen to pass your booth, but there are still opportunities to sell products and make money

how does a person do Shopify

a friend of the seller asked us if Shopify can open a store? Can a person do Shopify? How does a person do Shopify? The answer here is yes. Individuals can do Shopify. It should be said that Shopify is the first choice for most sellers to start independent stations, because Shopify has developed for more than a dozen ideas. It not only provides professional e-commerce website construction services, but also carries out e-commerce based on social networks

sellers can quickly build a beautiful and powerful online independent mall in a few simple steps. All newly registered Shopify have a free trial period. It is recommended to bind the credit card before the end of the trial period. Don't worry about driving Shopify alone. There are several key points to do well:

3. Marketing. If the seller's advertising budget is not much, try celebrity marketing. It is suggested to find online celebrities in small languages to cooperate, give products to each other, let each other give materials to themselves, and then put in advertisements. The effect will be better

4. Insist. Stay alive. Although a person can also do Shopify, Xiaobian still suggests to find a team and find a few like-minded people to do it together. After all, there are many people, great strength and many ideas. Division of labor and cooperation can quickly put their business on the right track

finally, thank you for your patience and wish you a big sale